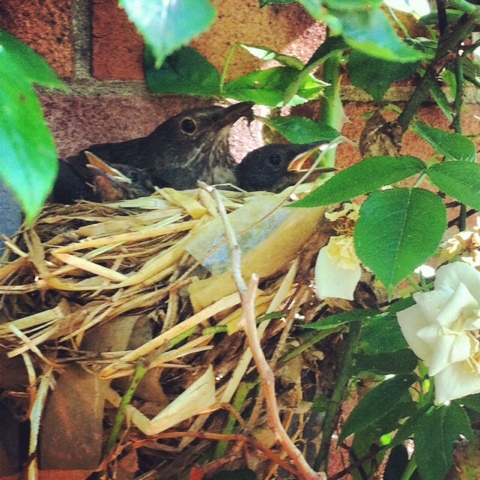 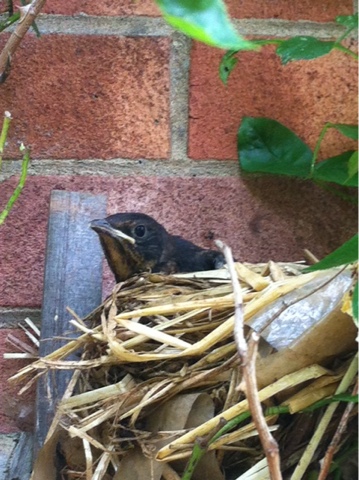 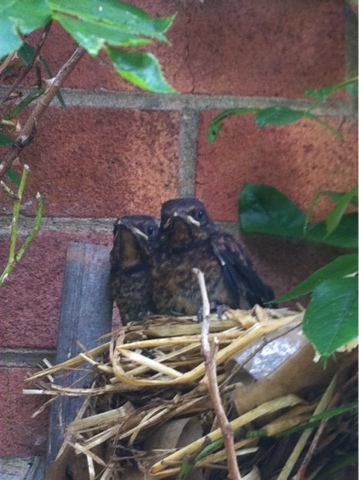 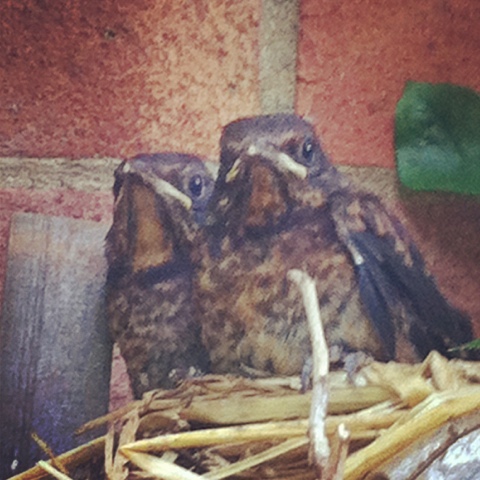 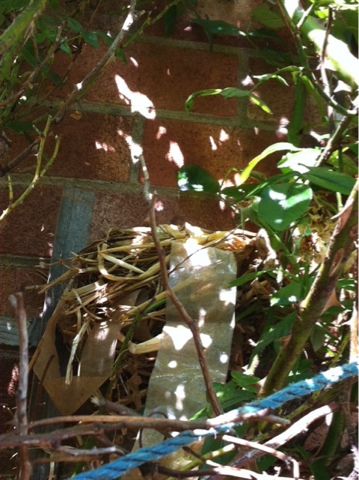 She made her nest right outside my kitchen window, nestled tightly against the wall, tucked in the yellow rose bush. She had collected straw from the chickens, plastic tape from somewhere, ribbon, paper and a whole load of stuff from somewhere else. She had woven, tucked and tended and created a masterpiece, ready for her babies.
Our relationship got off to a very difficult start, this Mama and me, she darted off whenever I was near, no time to chat, no time to get to know each other, no chance of letting her know I wanted to be her friend.
Slowly and I've no doubt the mealworms, I left out, played a huge part, we became friends, she was less inclined to fly away or snuggle down deeper over her brood.
We began to chat, she listened to me singalong to the radio, watched me hanging out the laundry and collect it in, she accepted me being around.
She began calling when I was in the garden, like a neighbour over the garden fence, I would wish her Good Morning, ask after her health, all with a smile.
Like any proud Mama, she was eager to show off her babies when they hatched and I was excited and extremely honoured to see them.
Such a delight, we all began to take time wishing her well, cooing and making all the normal new baby remarks.
She preened and fussed, flying in and out with meals, we saw more and more of her two babies as they grew, bulging out of the nest, demanding food and plenty of it.
Then came the wing stretching, the sitting on the very edge of the nest and at this point, we knew our days of having these beautiful, new neighbours were numbered.
Saturday was a long day away from home, while we visited with K, laughed, swam and enjoyed time together, that wonderful Mama and her two children moved out.
We came home to an empty nest.
Our own nest is emptying with L ( 21 next month ) still in Leeds, now living with his girlfriend and K  (17) out of hospital and doing very well, in a supported living placement near Manchester.
Thankfully, O with his nearly 8 year old zest for life and all it has to offer, fills our nest to bursting.

How lovely!I'm beginning to feel the flutterings from my baby birds too-eldest goes to uni in Sept with the middle one maybe going the following year. I get little tasters of how quiet my home may one day be & I'm not sure I like it!

So much love radiates from you. Beautiful xx